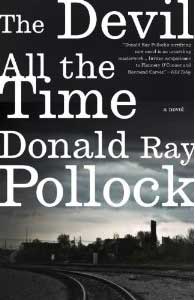 Donald Ray Pollock’s short-story collection Knockemstiff (Doubleday, 2008), knocked us upside the head and sideways with its raw, pitch-perfect prose which chronicled his hometown of Knockemstiff, Ohio, and the sad, albeit often humorous, dead-end plight of its inhabitants, who resort to drugs and all kinds of perverse activities to get through the day.  Huge expectations were had for his debut novel The Devil All the Time, which must be a horrible weight for an author.  But somehow I never once doubted an equal success, and that it is.

The novel moves between rural West Virginia and Ohio (with Knockemstiff entering in) and includes road trips across the country.  It may lack some of the humor in Knockemstiff, but no matter:  it’s grit-lit at its best.  Raw, gritty, hard-hitting fiction that packs a punch.  In a prose perfectly attuned to the subject.  There are a variety of oddball outcasts in these backwoods  communities. Arvin Eugene Russell provides the thread that ties them together.  Arvin is the son of Willard, a troubled WWII veteran, who drags the young boy to a ‘prayer log’ in the woods, making blood sacrifices to his personal God in the deluded hopes of saving his dying wife; and teaches his son to shoot a gun and to ‘wait for the right moment’ to take revenge—lessons Arvin learns well.

There is also Sheriff Lee Bodecker, taker of bribes and in on every shady transaction in the county, and his shy, not-so-bright sister Sandy who turns whore when she is seduced and trained by the thick and lazy lout, Carl. Carl and Sandy soon embark on a series of highway ventures  reminiscent of Natural Born Killers except that Mickey and Mallory were hardly crazed hill people. Carl and Sandy, let’s just say, take us down some altogether new and different roads.  And you will never forget it.

Then there is the preacher, Brother Roy, who dumps a jar of spiders on his head to show the Lord he is facing his greatest fear, which he knows the Lord will protect him from; and his wheelchair-bound cousin, Brother Theodore, who provides musical accompaniment of a sort on his banged-up guitar. (“If your worst fear is rats, then Satan will make sure you get your fill of ‘em.  Brothers and sisters, they’ll chew your face off while you lay there unable to lift a single finger against them and it won’t ever cease . . . . we can’t even picture the ways the devil’s got to torment us, ain’t no man ever been evil enough, even that Hitler feller, to come up with the ways Satan is gonna make the sinners pay come Judgment Day.”)

If Kurt Vonnegut is right and every story needs a character to root for, then Arvin in our man here.  But what can he do amongst a throng of inbreds, which, though it is never so much as hinted at, is about what some of these characters appear to be.  Logic, morality, religion?  They have their own sense of it, and it is not anything familiar to us. Yet, the story rings true.  And it’s one hell of a good story.  Pollock pulls back the curtain on a world remotely different from ours.  Sure, we may have bumped across it here and there, but Pollock takes us to the heart of it and gets us to see it through their eyes.  And that is what good fiction is all about. J.A


This reviewmay not be archived, reproduced or distributed further without the author's express permission. Please see our conditions of use.