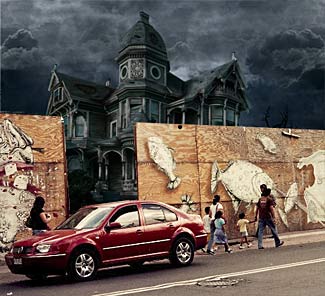 Translated from the Spanish by Graham Thomson

My mother invented fear. Her own, which is highly personal, she keeps in the drawers of an enormous closet that my grandfather made from the boxes he stole from the dead seconds after they were buried. The old girl studied phobia at university before she married my father, and succeeded — guided by her true vocation — in accumulating and classifying other people’s dread, which she stowed on long shelves throughout the rooms of the close-shut house in which we lived, thus converted, thanks to her efforts, into a grand repository of fear.

My brothers and sisters and I, thirteen in all, slept on bunks that she hung with cobwebs from the ceiling of the second floor, our pleasant bedroom hanging just above the void of the cellar, which watched us with its mocking eye from a distance of more than twenty metres. My mother, aided by insomnia, wove large sacks which she attached under our bodies suspended over the abyss to collect — as I heard her mutter in her monologue — every last drop of the fright that we exuded during our peaceful sleep.

It was a special day that someone knocked at the door. She embellished herself with fear and we all ran to our hiding places; then, obedient to my mother’s signal, my father swelled up with terror and sent his shadow to receive the visitor. On the chance it was a summons, we spent months and months without leaving the hole, afraid we were the ones they had sent for. During such times, my mother would put on a few pounds and, wreathed in smiles, go to and fro with the vacuum cleaner she used to suck the panic out of our hiding places without having to bother us. She died of happiness on her birthday. We gathered together all of the frights scattered around the place and made her a gift of them, in a box adorned with toads and snakes, which used to terrify her so.

I think people like us, even though fear prevents us from returning their greetings. Many of those who come to sell us their fear end up feeling sorry for us — of course, they don’t know that we are almost rich with our collection — and give it to us for free. My father doesn’t have enough money to buy all the terror they bring us; he used to have a good salary, but to please my mother he transferred to a torture factory, and though he earns less as an assistant neck-wringer, twisting testicles and other trifles, he can steal scraps of the fear that spill from the users and give them to his wife.

Today none of us came out of our holes. We think mamma went mad. Always so proper, we saw her strip naked in front of the window that had never been opened, shouting obscenities and pointing at her sex, while the people in uniforms parading down the street looked at her in terror.

This electronic version is published by kind permission of the author.

This story may not be archived, reproduced or distributed further without the author's express permission. Please see our conditions of use.


Raúl Ortega Alfonso (1960) writes poetry and prose. A naturalized citizen of Mexico, his country of residence since 1995, he has published the poetry collections Las mujeres fabrican a los locos (Abril, 1992), Desde una isla, with the artist Carlos Alberto García (1997), Actacomún de nacimiento(Praxis, 1998), Con mi voz de mujer (Arlequín, 1998), La memoria de queso (La Torre de Papel, 2006) and Sin grasa y con arena (Velámenes, 2011). He has written for the ‘Noterótica’section of the Mexican edition of Playboy and as a columnist in the Sábado cultural supplement of the newspaper UnomásUno