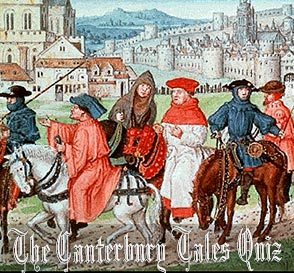 1. Only two of Chaucer's tales are written in prose, the Tale of Melibeus and The . . .
a. Reeve's Tale
b. Merchant's Tale
c. Parson's Tale
d. Man of Law's Tale

2.   According to Albert Baugh's labeling, which one of Chaucer's tales could be called a Breton Lay? The Franklin's Tale

6. The Miller's Tale was enjoyed by every pilgrim except the . . .
a. Reeve
b. Cook
c. Parson
d. Prioress

7.   This female is caught by her husband fornicating in a tree, but her quick tongue saves the day . . .
a. Dorigen
b. Griselda
c. May
d. Emelye

8.   The knight in The Wife of Bath's Tale must seek the answer to what women most desire, which is . . .
a. sovereignty over their husbands
b. wealth and treasure
c. jollity and pleasure
d. love and adoration from all men

9. This pilgrim rattles on about the seven deadly sins . . .
a. Friar
b. Parson
c. Nun's Priest
d. Squire


11.   The Knight tells which other pilgrim that his stories are so boring he almost fell asleep . .
a. the Merchant
b. the Sergeant of Law
c. the Shipman
d. the Monk

12. Which tale is preceded by an even longer prologue? The Wife of Bath's Tale

13.   After hearing the Friar's Tale, this pilgrim was so angry that lyk an aspen leef he quook for yre.
a. the Summoner
b. the Pardoner
c. the Cook
d. the Manciple

14. In this tale, the knight Virginius was so honorable that he . . .
a. cut off his daughter's head
b. bedded her
c. starved her to death
d. cut out her tongue

17.   Three drunken men decide to seek out Death and slay him, but Death catches them by poison and a . . .
a. hanging
b. stabbing
c. drowning
d. plague

18.   In Pasolini's film adaptation of The Canterbury Tales, the director appears in the film in the guise of . . .
a. the Host
b. a modern-day director
c. Chaucer
d. an unnamed pilgrim

19. In the 2001 British TV series adapting Chaucer's tales to a modern setting, the Wife of Bath personality is played by . . .
a. Julie Waters
b. Judi Dench
c. Dawn French
d. Sue Johnston

20. In the animated film version of The Canterbury Tales, Sean Bean does the voice-over for the . . .
a. Physician
b. Nun's Priest
c. Knight
d. Host

This qiz and the answers may not be archived, reproduced or distributed further without the author's express permission. Please see our conditions of use.