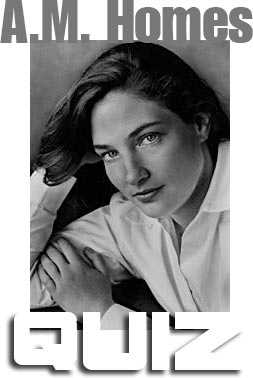 Quiz on A.M. Homes
THE ANSWERS

Anybody that follows The Barcelona Review knows that A.M. Homes is a favorite author.   Because she writes stories and books that make us feel good?  Uh, not exactly.  If Steel Magnolias and Fried Green Tomatoes are your what you’re after, don’t even think of Homes.  If honest, edgy writing, intelligent prose, and thought-provoking narrative is more your style, then chances are you’ve already discovered her.

2. In a Country of Mothers, the woman who convinces herself she is Jody’s biological mother is Jody’s . . .

4. The characters Paul and Elaine first appear in . . .

5.  In which short story does a young woman try to inseminate herself by quickly collecting discarded condoms from young lovers on the beach?
“Georgica”

6. Name the short story about ex-President Reagan and Nancy after Reagan has succumbed to Alzheimers?
“The Former First Lady and The Football Hero”

7. In This Book Will Save Your Life, Richard Novak discovers his new Malibu neighbor is a famous . . .

8. Name the boy who commits a school killing (in a novel published three weeks before Columbine)?
Nate Warshofsky

9. Which of Homes’ novels was banned by W.H. Smith in England?
The End of Alice

11.  In her memoir The Mistress’s Daughter, Homes first sees her biological mother . . .

12.  The incarerated pedaphile in The End of Alice corresponds with . . .

14. Homes wrote the film adaptation of one of her novels for Showtime, which aired in 2004 and won an Emmy Award for which actress?
Stockard Channing

15. In addition to writing, producing, teaching and editing, Homes is also a highly respected . . .

This quiz may not be archived, reproduced or distributed further without the author's express permission. Please see our conditions of use.